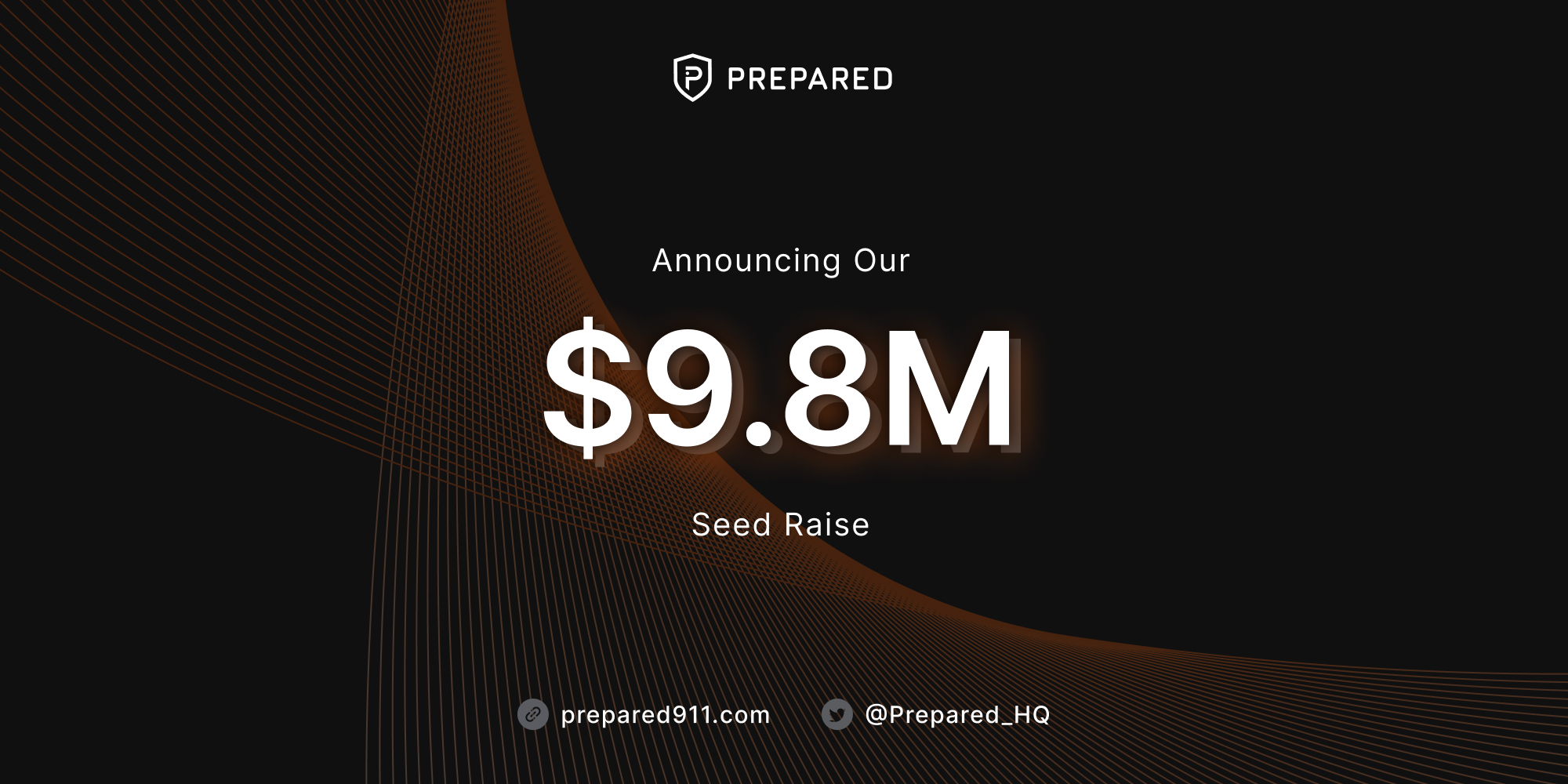 Two years ago, the Prepared team set out on a mission to improve public safety through a simple philosophy: unlock the power of existing, widely available technology to make emergency communications faster, more accessible, and more powerful.

Our journey began in schools. During this time, teachers and administrators would ask us what happened once our technology helped them reach 911. Questions like, "Can I send these videos and pictures?" or, "How will they know my location if I can't describe it?" We didn't have a good answer - and soon discovered that no one else really did, either.

Every day there are more than half a million 911 calls made in the United States. Each is a potentially life-changing event for that person and each, it seemed to us, was leaving life-saving data on the table.

How? While around 80% of these calls originate from wireless devices, our 911 systems are built as if they're coming from landlines. Where private technology has advanced, 911 has lagged, due primarily to challenges of education and funding. Over time, the industry has been slowed by long, bureaucratic sales cycles and valid concerns around ripping and replacing existing systems. This has created an environment where innovation has stagnated and new development discouraged.

Additionally, 911 hasn't often been at the center of government spending conversations. The last House proposal of the Build Back Better Act in November saw a committee-recommended $10 billion slashed by 95% - a number that still dwarfs any other one-time government spending proposal for 911. As a result, over the last three and a half years, hundreds of 911 dispatchers have told us they are lacking critical data. 911 operators believe they can do more and have the desire to receive more information, but a slow-moving space and a lack of resources are holding them back.

What if they weren’t?

Over the last year, we've embarked on a journey to answer that question by building a non-native, dispatch-guided software platform that:

Most importantly: we are committed to providing this functionality to 911 for FREE.

As part of our effort to easily integrate with PSAP processes, we're excited to announce Prepared is now part of the RapidSOS Partner Network and will soon be available to emergency communications centers with access to RapidSOS Portal nationwide.

911 has remained unchanged for far too long; not because the technology doesn’t exist, but because the current structure doesn’t allow it. Our business model prioritizes speed and innovation so that centers can focus on doing what they do best: saving lives.

Early results in our dispatch centers have been incredibly encouraging. Teams have found innovative ways to utilize and customize the software to fit their unique needs. As they've provided feedback, we've continued to update and improve the platform with our singular goal in mind.

Today, dispatch centers that rely on Prepared Live as their next-generation solution cover over two million Americans. To continue our rise, and save more lives, we need to grow our team, enhance our technology, and expand our reach further and faster. That said:

I’d like to formally announce Prepared’s Seed Raise of $9.8 Million, the second largest ever in Public Safety

The round is led by new investors First Round, Gradient Ventures (Google’s AI-focused venture fund), 8VC, and industry angels. Returning investor M13 and new investor Risk and Return, a fund focused on investing in companies that build solutions for high-risk, frontline public servants, also participated in our oversubscribed round. This capital brings our total money raised to over $12 million.

“We're so excited to be supporting Mike and the rest of the Prepared team. It's an honor to work with Prepared as they help make some of the most stressful moments in life a little bit safer,” says Meka Asonye, Partner at First round, “Augmenting 911 calls with video, location, and photo data makes so much sense for public safety and has so many different use cases. I’m thrilled to support an incredibly mission driven team that’s modernizing public safety and helping our first responders have more context when they arrive on scene.”

“Mike and his team have built an incredible business that is truly set to disrupt an age-old category that is burdened by legacy technology. With the heroic work performed by 911 dispatchers and first responders alike, affording them the best communications tools and unique insights into the details of an incident will save both civilian and first responder lives.  It is an honor to be a part of that journey,” says Karl Alomar, Partner at M13.

“Historically, audio is the only layer of data accessible by 95% of emergency dispatch systems, and Prepared is disrupting this legacy system to improve first responder situational awareness by capturing the organic data available in users' smartphones. We've been watching this market for a while and we believe that Prepared is the team to solve this historically challenging problem. They are perfect fit for Risk and Return in terms of stage, company culture and market approach,” says Ray Kelly, advisor at Risk and Return and former Commissioner of the New York Police Department.

“Communication, preparation, and response times are all critical in providing excellent emergency response. Prepared’s technology will help make sure dispatchers and first responders have more information about emergencies and the people affected by them thus helping them do their jobs even faster and better,” says angel investor Adrian Fenty, former Mayor of Washington, D.C.

As a company, we're incredibly thankful for each of our investors and their belief in our mission. Their capital, expertise, and guidance will help us unlock the next phase of our growth. Specifically, we'll deploy the capital to:

I'd like to give a special thank you to the Entrepreneurship & Innovation Clinic at Yale Law School for their legal guidance and support as we've grown from a dorm room to our office in New York City. We would not be here without you.

I'd be remiss to not mention the incredible work by our team that enabled us to reach this milestone. They work diligently, day-in and day-out, with our founding philosophy in mind, to help create safer communities around the United States. This fundraise would not be possible without their hard work and sacrifice and, for that, I am incredibly grateful.

To my co-founders, Dylan and Neal, thank you for everything. By no means is founding a company out of a dorm room easy, but in the face of adversity you never flinched.

To the rest of the team: you are the heartbeat of Prepared. Thank you for joining our mission — your work saves lives.

Prepared has evolved from a company intent on developing a solution for school emergencies to bridging the gap that we saw between the data we could provide and the data that 911 could accept. This concept is novel and far from ubiquitous. I do believe, however, that when we look back in five years’ time, it'll be an astonishing notion that we relied only on verbal calls for emergencies so deep into the 21st century.

We haven't achieved our goal until every PSAP and first responder has this functionality. We won't stop until they do.

Prepared is a startup company aiming to bring greater clarity and efficiency to the 911 process by providing dispatchers and first responders livestream, and other advanced data, from mobile 911 callers in real-time. Millions of 911 calls leave valuable, life-saving data on the table each year simply because our emergency operators do not have the technology to access it. By harnessing the power of existing technology, the Prepared team believes that we can create safer communities, built together.

Founded in 2019 in New Haven, the company is led by founders Michael Chime, Dylan Gleicher, and Neal Soni. All three attended Yale University, where they met and founded the company. Gleicher and Soni both hail from Westport, CT and were childhood friends. Chime, a Thiel Fellow, was recruited to play football at Yale but turned his focus to Prepared full-time during his Junior year.