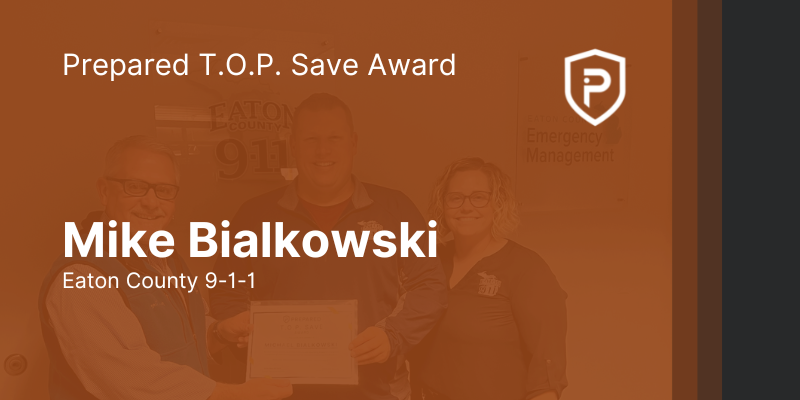 When a call arrives on a 9-1-1 center’s non-emergency line, you never know what might be happening on the other end. Sometimes it’s truly a non-emergency, other times it’s a woman calling to report that she believes her brother is having a seizure but she’s not sure where he is.

For Mike Bialkowski, it was the latter. His actions on that call earned him the fourth-ever Prepared T.O.P. Save Award, given to Telecommunicators Operating Prepared Live for distinguished service to their community and their Center.

This is his story.

From the minor league to major emergencies

The Lansing Lugnuts are the minor league High-A affiliate of the Oakland Athletics. Why am I telling you this? Well, you can’t tell Mike’s story without mentioning the esteemed local baseball team. The team’s mascot, a purple dinosaur with lug-nuts for nostrils named Big Lug, is a bonafide local celebrity. According to an article by Michigan Live:

“The Big Lug is busy with promotions visits and community events year-round, according to Lugnuts’ Director of Marketing Julia Janssen.

‘He goes everywhere,’ Janssen said. ‘We do over 300 appearances in the mid-Michigan area all year. He never slows down. Actually, he has a pretty intense schedule.’”

Luckily for his teammates at Eaton County 9-1-1, Mike was once the man that inhabited the purple suit. As a result, he earned the nickname “Big Lug” and it hasn’t left him since. He jokes that, at times, he doesn’t even respond to his own name because he’s so used to being called by the mascot’s name.

Ultimately, Mike’s time in the purple suit was somewhat short-lived - at least relative to his career with Eaton County 9-1-1. He joined the team in 2004 and hasn’t looked back:

“At that time, I was 25 and I was like, ‘I need to get myself out into the world and do some stuff. My father, who lives out here in Charlotte, knew the sheriff at the time, talked to him, and found out that there were openings in dispatch. I put in my application and got hired here.”

“You know, I'd really do enjoy helping people…you can help people even when they're in their toughest time. I enjoy calls when it's busy and you’ve got structure fires, ambulance calls all happening at once and you know you’re helping people. I've helped deliver a baby on the phone, that was quite an experience.

Yes, you read that right. Mike did in fact help deliver a baby on a 9-1-1 call. It’s a call that he says he still remembers vividly to this day and he even eventually met the parents of the child a few months later. While helping deliver a baby is certainly difficult and complex, Mike recently had a call that was potentially even more complicated. His actions on the call earned him the Prepared T.O.P Save Award.

Find the caller, get them help

Caller location on 9-1-1 calls was once a mystery, only to be solved by verbal description. Nowadays, it’s far from it. Great technological evolutions have helped ensure 9-1-1 callers can be found no matter what...but even great technology has its limits.

Eaton County 9-1-1 recently received a call on their non-emergency line from a woman in the Lansing area saying that her brother was having a medical emergency. The only problem? She had no idea where he was.

Initially, the woman stated the brother was “somewhere between Chicago and Lansing.” Talk about a needle in a haystack! Because the call came in on a non-emergency line, and the brother himself never called 9-1-1, Eaton County’s standard location technology was rendered ineffectual for this emergency. Fortunately, Mike was able to get the brother’s cell phone number from the woman and immediately sprang into action.

He called the brother, who he could tell was having a medical issue (as reported by the woman), and attempted to gain more clarity on the situation. He then decided he wanted to try to use Prepared Live to gain access to livestream and GPS location, “I sent a Prepared Live link to the brother and I walked him through how to click on the link.  [He] clicked the link and we were immediately able to see him, his hotel room, and his location - Addison, Illinois.”

Helping on the call was Rich Thacker, Mike’s supervisor. Describing how the situation unfolded, he says, “While I talked with the brother, Mike did an ORI lookup for Addison and got in touch with their 911 Center to send an ambulance and police to check on the brother.  I was able to talk with the brother to relay the EMD questions to get more information on his condition.  I could also see that he had an abrasion on his forehead where he had lost his balance during the seizure and had fallen.”

Together, they maintained contact with the victim until help arrived. What could have been an hours long process concluded in mere minutes as a result of Mike’s quick thinking to deploy Prepared Live, gain access to GPS location, use video to see the hotel room number, and properly assess and pass on information regarding the caller’s condition to field responders.

Quick thinking, even quicker acting, and effective use of technology by Mike ensured that he got a citizen the help they desperately needed.

A man intent on helping others

Mike Bialkowski is the ideal dispatcher in every sense. His smarts, altruism, and positive spirit make him an invaluable member of Eaton County 9-1-1 and we’re proud to have him utilizing Prepared technology.

As for the man himself, he just wants to continue helping people, he says, “I just I like doing my job. I like helping people and working with youth sports [organizations] and things like that. It’s making other people smile that's important and that's what I enjoy doing.”

Keep up the great work, Mike!

Learn more about Prepared and get in touch with us by filling out the form below: