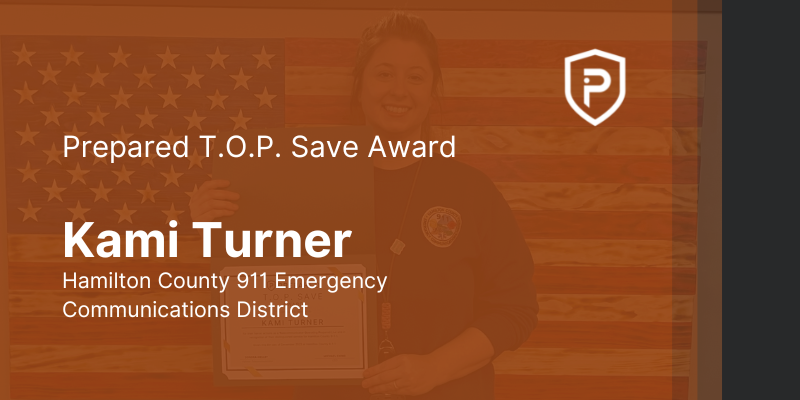 Note: This article contains a description of a domestic incident that may be triggering for some readers. If you or a loved one are affected by domestic violence, please call the national hotline at 800-799-7233. If this story may be upsetting to you, please do not read on.

In our everyday lives, each of us interact with and are impacted by many other humans. The majority of the time, we don’t give these passerby more than a glance or fleeting thought, let alone consider the struggles they might be facing just to get through that day.

In 9-1-1, telecommunicators confront these moments head-on, hour after hour, day after day, helping complete strangers in the worst moments of their lives. Kami Turner, a Supervisor with the Hamilton County 911 Emergency Communications District (TN), approaches the task with a focus on compassion and a recognition of the caller’s humanity.

“It’s a daily struggle at times [to remain compassionate] but you have to remember that they’re calling for a reason. And whether that reason matters to you or not or it seems like its a big deal, it is a big deal to them. At the end of the day, it’s a human being on the other end of the line so I’m going to speak to them like I want to be spoken to,” she says.

This attitude and disposition is what led to Kami receiving the Prepared T.O.P. Save Award, given to Telecommunicators Operating Prepared Live for distinguished service to their community and their Center.

This is her story.

Family time is limited when you work the midnight shift. Still, Kami, her three-year old daughter, and her husband do their best to make it work.

“My husband works second shift so family time is hard, especially with how centers are right now, everyone is short staffed and overtime is abundant and there’s not a lot of down time or family time but they understand,” she says.

Kami and her husband have been together for eleven years and she calls her daughter the “love of her life.” Family support is crucial in this profession.

“I get a lot from my husband saying he’s proud of what I do, which goes a long way. I actually brought my daughter up the other day and she’s ready to go! We unplugged a phone and [gave it to her] she answered it and started typing on the keyboard.”

The talent of 9-1-1 telecommunicators runs in the family, it seems!

Kami’s altruism was on full display a few months ago when she went beyond the call of duty to help a woman in need:

“We had a young female that was stranded on the side of the road. She was pregnant and she had been left…I think her boyfriend had gone back to New York. Our officer that got out to meet her tried all night to find a women’s shelter for her to go to…just somewhere for her to stay the night before we could get a bus ticket for her.

The officer ended up getting a bus ticket for her but couldn’t find anywhere for her to stay so I paid for her hotel [out of pocket] so she’d have somewhere safe to stay. We got her to her family the next day.”

And while that story is special, so is the Save that earned Kami her T.O.P. Save award.

See the scene, get the help, make the Save

Recently, Hamilton County 9-1-1 received a call from a third party caller in another state, reporting that her friend was being held in her apartment by her boyfriend, who was armed with a knife, and both parties were intoxicated. Kami acted quickly to help resolve the situation safely.

Here is the story in her words:

“We got a report from a third party caller calling from Alaska…we had gone back and forth with the female from Alaska trying to get phone numbers to get on scene and see what was actually happening. We finally got [the victim’s number] and I got her to accept the [Prepared Live] link. She was still on the phone with her friend from Alaska so I had both of them in my ear trying to  provide instructions.

She had been in there for 20 or 30 minutes by the time I got her on [livestream]…I wouldn’t say she was being held hostage but she was not free to go, by any means, as the boyfriend was blocking her way. He did not have a knife on him by the time I got the call but he was still drinking and there were multiple weapons nearby.

My main focus was to make sure that she was a safe distance from him and to get her to cooperate with me as much as possible to get the weapons away because I knew we had officers at the door waiting to force entry, depending on how the call went.

I got her to cooperate, move the weapons…there wasn’t a lot of conversation with [the boyfriend] as he was too far gone. He stood in front of the door most of the time, barring her way. He opened the door once and spoke to the officers and shut it, then he would communicate by just yelling through the door.

[By having seen the livestream] I was able to give the officers the layout of the apartment, the counter where [the girlfriend] was, where [the boyfriend] was, and, right before I knew they were going to force entry, I got her sitting down and away from the door…once they forced entry, they got him into custody pretty quickly, with no injuries, and got him the help he needed.”

Kami’s efforts had a profound impact on the emergency at-hand and, for that, we applaud her endlessly. How might the situation have gone differently without access to Prepared Live?

“It definitely would have been a lot of back and forth, a lot of different phone calls, and information would’ve been relayed slower. Having two people on the phone, one intoxicated and not wanting to be there and being held against her will, you’d be lucky to get any useful information at all,” Kami says.

Kami Turner is an exemplary telecommunicator in every sense. Her altruism, intelligence, and positive spirit make her an invaluable member of Hamilton County 911 and we’re proud to have her utilizing Prepared technology.

Humble to a fault, Kami concluded the interview by praising her team:

“I do want to recognize our team, we have a great team, and everyone works together when it comes to pulling together a call. Everybody does a great job, so this wasn’t just me, it was everyone working on the floor.

Every now and then you get a call where it really feels like you have a made a difference to that person. Those are the kind of things that keep you going after you’ve been here for a while.”

Keep up the great work, Kami!