Jim Scalzo makes a T.O.P Save on Top of a Mountain 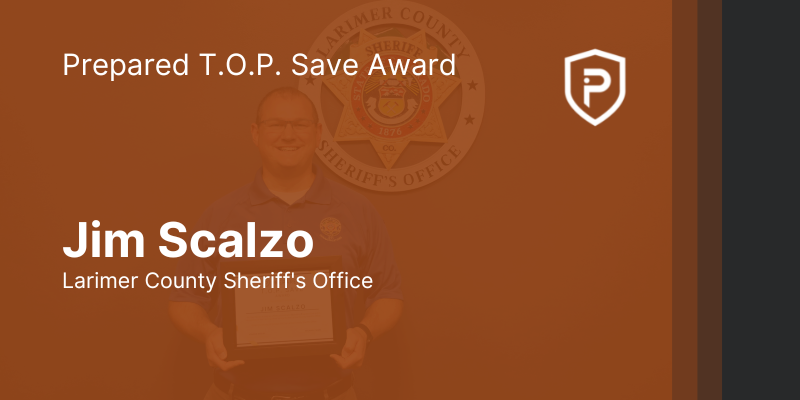 It can be difficult to interview a humble person about a great accomplishment. They’re more likely to deflect praise and under-exaggerate their achievement than tell you the full, riveting tale. Jim Scalzo of Larimer County Sheriff’s Office, the second-ever recipient of the Prepared T.O.P. (Telecommunicator Operating Prepared Live) Save Award, follows this stereotype to a tee. The hardworking, down-to-earth St. Louis native has spent the last half decade helping others in his new home state of Colorado.

His attitude, while certainly refreshing, is not something that sprung up as the result of a midlife crisis or sudden epiphany. Rather, Jim grew up in a household with two parents that embodied selfless attitudes in their own professions. His father was an Emergency Room physician in the inner city and his mother an elementary school teacher for many years. They instilled altruistic values in him from a young age.

Many years later, with a Masters from Webster University and a B.A. in Criminology and Criminal Justice from the University of Missouri (St. Louis) in tow, Jim is a father himself and has settled into life out west.

“[My family] has been in Fort Collins for the last 12 years since 2010, we love it out here. It’s a wonderful place, it’s a wonderful community. I have a wonderful family with my wife and two little girls, a 6 year old and a 9 year old. They keep us active constantly doing different sports,” he says.

He emphasizes to me that he’s a huge St. Louis Cardinals fan, despite his roots now laid in the Rocky Mountain State. Jim’s path to 911 dispatch has been a winding road full of twists, turns, and various professions.

“I always wanted to do something in public safety and law enforcement. I went to school to be an EMT and decided that wasn’t for me after some ride alongs in an ambulance,” he chuckles and adds, “I have a background in leadership, I worked in executive leadership for Target for 14 years in a variety of capacities. I worked for Whole Foods market after that for a little while before coming to the Sheriff’s office.”

Jim joked to me that, after years at Target and Whole Foods, he wanted to “get out of retail.” He began to explore jobs with the Sheriff’s office, first examining the idea of becoming patrol officer but they weren’t taking any applications for the position. He pivoted and looked to 911 dispatch, decided to apply, got the job in 2016, and has loved it ever since.

As anyone that works in 911 knows, every day in the life of a dispatcher can be something completely different than the day before.

For Jim, that’s all part of the allure, he says, “The biggest benefit of this job is that it’s never the same, you don’t know who you’re gonna pick up on the other end of the line. Are you going to save a life that day or are you going to have somebody yell at you about some silly thing?”

He continues, “It’s a challenge because you always have to be on your toes...but it’s also rewarding because you get to help the community and help the public. You can be a voice of reason to some people, be a calm voice to somebody else…it’s been a wonderful job and we have an awesome team here.”

His last point, about the team at Larimer County Sheriff’s Office, is something he emphasized multiple times throughout the interview. It’s actually one of his favorite parts of his job, “Working with our team, we have a really great team, and the environment we work in makes it fun to come to work. You don’t dread coming to work and everyone chips in.”

From his time as an Eagle Scout to today, Jim has always had a desire to solve complex challenges. Larimer County Sheriff’s Office covers a large, topographically diverse territory in Colorado and, as a result, there are a number of uniquely challenging calls that come through. Jim explains why he enjoys that aspect of the job:

“I think the saves that I enjoy the most are the search and rescue ones. We get some wild ones with little to no information and have to be able to pinpoint where somebody is and find them.

For example, shortly after the Cameron Peak wildfire started, there was some speculation that there might be some people missing that were hiking…then about 3-4 days into the fire we got an SOS activation from somebody that was in the burn area. It turned out to be this gentleman that had gone hiking the day the fire started and he got caught up in the fire so he kept on following where the animals were going. Eventually, he gave up, realizing he couldn’t get out of there, and called SOS using his Garmin device. We figured out where he was and we had to employ the CO National Guard to hoist him out of there…The airship picked him up and flew him to highway 14 where his vehicle was…and the responders followed him back down the canyon and got him back to safety.

The International Emergency Response Coordination center in Texas are the ones that receive these SOS activations and whenever I see that number pop up, I’m like, ‘I want to answer that call’ because that’s going to be a fun call. Fire calls, search and rescue calls give me joy in trying to figure them out because it’s a puzzle. Sometimes you have to work with limited information and figure out what resources are needed and where they need to go. There’s always something unique and challenging.”

Recently, he got a chance to solve a problem with a new tool in his dispatch center: Prepared Live.

A TOP Save on Top of a Mountain

Stranded climbers and hikers are a standard occurrence year-round for Larimer County Sheriff’s Office. They happen for a variety of reasons but the process to find and save them is generally pretty standard. Recently, however, Jim got a call about a lost climber that was a little rarer: a free climber stranded on a ledge halfway up the rock face of Greyrock Mountain. This is the Save that won Jim his T.O.P. Save award. This is the incredible story in Jim’s words:

“The initial 911 call went into Fort Collins 911 and they got some limited information that there was a climber stuck on the rock face…but there were a lot of missing pieces, including where exactly the caller was. I reached out to the caller on the phone to get some more information when they transferred the call to us and I realized it was going to be a long time before anybody got up there to save them.

Note: a man using full climbing gear had stumbled on the free climber on his way up the mountain but did not have the gear needed to bring both of them down

They were pretty far up the mountainside in an area where we get calls from all the time. It’s a big loop where you go up the canyon and loop back down after you reach the top. Even though we have tons of calls there every year, I don’t think I’ve ever taken a call where someone was stuck climbing and needed to be rescued so I knew it was going to be interesting. Knowing that the cell phone service up there is very limited, the fact their phone signal bounced to Fort Collins left me wondering if they had enough cell phone service to use Prepared Live and I said, ‘Let’s try it.’

I told the caller I was going to send him a link and that I wanted to get a good 360 degree view of where he was so the first responders could use it…As the video started coming in, I was like, ‘Wow, this guy is really on the side of the mountain - with this guy he came across -  and I’m shocked Prepared Live works up there.’

I didn’t think he’d have enough data signal for it and it was crystal clear. I think he sent two or three videos and gave us a good area of where he was. Then I started chatting with him to get some more information because I initially figured it was just a standard climber that was tired that couldn’t get down but it turned out to be this guy that was just scrambling up the rocks, free climbing with no climbing gear at all.

I can’t remember if he was going up or down but either way he got stuck on this ledge and this random citizen who was out climbing by himself, had the proper gear and came on this ledge and found this guy all by himself and that’s when they called 911 because he didn’t have enough equipment to help get this guy down safely. We ended up employing the use of the UC Health Lifeline helicopter which shuttled the first responders from the landing zone up there. Storms were coming in so I was monitoring the weather, on the phone with the NWS trying to get some detailed weather for that area, where the lightning was, what the next few hours looked like.

I constantly checked in with them, letting them know help was on the way and that the helicopter was coming so that they wouldn’t be freaked out when they heard it or saw it. It was cool to stay in connection with the caller through Prepared Live. We pushed the original videos out to the first responders, I ended up sending it out to the whole search and rescue team while they were en route. The lead climber that ended up saving them was able to recognize exactly where the caller was and determine the best way to save him because of that video. It was awesome and I’m glad we got them help.

Talk about a complex puzzle! Because of the rarity and complexity of the situation, Jim says Prepared Live proved to be incredibly valuable, “Without Prepared Live on that call and knowing the exact pinpoint of where they were…it probably would’ve been hard to figure out how far up they were, which route they were on.”

He adds, “I’m not sure that if that call would’ve went the same way [without Prepared Live]. It would’ve been hard to keep in touch with him, we wouldn’t have had the ability to text back and forth with him, we would’ve had to call him for updates so…being able to text him every half hour or so with updates…telling him what was going on, none of that would’ve happened without Prepared Live.”

That communication is incredibly important to keep a caller calm and understanding that they aren’t alone - and that’s what Jim does best.

Jim’s story is that of a person born to serve others. We at Prepared are proud to have him using our software to help save lives and aid members of his community.

As the interview concluded, Jim left me with these last thoughts, ”I’m humbled to accept the award but I accept it on behalf of my whole team. I’m excited to see more saves with it and figure out how else we can use it.”

A humble team player, through and through. Thank you for all that you do, Jim.