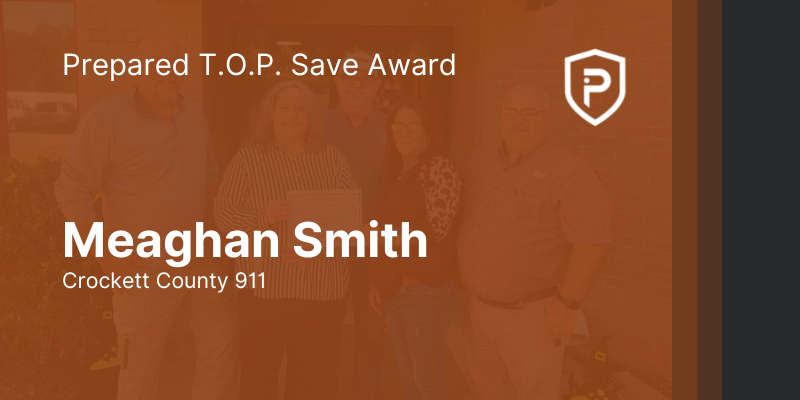 How many writers do you know that moonlight as lifesaving 911 dispatchers? Well, speaking for myself, I can count that number as one: Meaghan Smith.

The 44-year old Tennessee resident has made a habit of three things over the last decade of her life: being a great mom, writing, and helping other people. In all of these areas, Meaghan is always looking to learn, grow, and improve. When her dispatch center, Crockett County 911 (TN), added a new piece of technology to their toolbox in the form of Prepared Live, Meaghan’s first inclination was to understand how it could help her on her journey to become a better dispatcher.

She quickly learned just how helpful it can be as she used it to help save a life via T-CPR, earning a Prepared T.O.P. (Telecommunicator Operating Prepared Live) Save Award in the process.

Jumpstarting a career in public safety

15 years is a long-time to spend out of work and still have the motivation to return to the workforce. For Meaghan, the idea was daunting at first. About five years ago, she began to ease herself back in with a volunteer role at Red Cross, taking emergency calls. Her husband was already working with Red Cross at the time and when they asked her if she might be interested in taking on a role, she thought, “I think can do that.”

Then her first call came and gave her the bug she hasn’t been able to shake:

“The very first call that I got was a client’s home that had been burned down and she had terminal cancer. I went out and met her and she hugged me and she thanked me for coming. As hard as that was, the fact that we were able to help her [and what that meant to her]…that hooked me. With Red Cross, I’d get to meet children who’d come into the office and to be able to give them a teddy bear and a treat and see their reaction…For me, that’s what keeps me going.”

Meaghan wasn’t satisfied with her starting role, however. She’s a naturally ambitious person with a drive to succeed and quickly climbed the ladder in the organization:

“When started I was the person that supported a lot of the volunteers. Then I went from answering the phone, to being a dispatcher, to being a disaster action coordinator, to finally being a regional duty officer, looking at the whole state of Tennessee and their Red Cross dispatchers. When I start at the bottom, I try to go as high as I can. I’m like a bulldog. When I find a thread I pull, and pull, and pull until I get as far as I can get. It’s my nature to want to succeed.”

In 2021, after four years advancing as a volunteer with Red Cross, she thought she might be ready for more. She met a someone working for Crockett County 911 who mentioned that they were looking for more dispatchers.

Having already gained experience in dispatch, she figured why not give it a try and, in June of 2021, began her role with the center. While she’s transitioned from a volunteer role to her new full-time position, she hasn’t lost her drive to succeed and improve:

“My favorite part about being a dispatcher has been learning and growing and getting better as time goes on. Sometimes I have a hard time seeing that I’m doing well and when Gail (her supervisor) tells me I do well, that helps. Every call I try to get better. I also like that we do all of police, fire, sheriff, and EMS. If we downsized to do just one, I’d probably leave. I never know what’s going to happen on a call or how I can use the technology for it, so learning new things is always great.”

Gail Wallace, her supervisor in the center, calls Meaghan “a very thorough person” who does a great job as a dispatcher. As I spoke with both of them, you could sense the pride that Gail has for her dispatcher and the work that she does.

She’s never been more proud than when, a little over a month ago, Meaghan stepped up to help save a life.

See the scene, save a life

T-CPR is defined as, “…instant instructions [from the telecommunicator]…[allow] bystander CPR to begin – it works by keeping the brain and heart alive until EMS arrives to provide defibrillation and other vital interventions. T-CPR can assist the untrained caller as well as remind the CPR trained caller how to provide high-quality CPR.”

According to the American Heart Association, “When CPR begins prior to the arrival of emergency medical services (EMS) personnel, the person in cardiac arrest has a two to three-fold higher likelihood of survival.”

Simply put: T-CPR is a vital intervention that can save thousands of lives per year. However, it can be incredibly difficult to administer. Meaghan found out just how difficult when she received a call from a mother saying her son was passed out in their front yard and not responding. Here is the story of the T.O.P. Save in Meaghan’s own words:

“I took a call and there was a mother on the line that said she found her son outside in the grass and that he was not responding. I started off initially by getting her down there to start the CPR, trying to find out if he was actually breathing, and if we could get that airway clear. As she starts the CPR and I’m sitting there talking to her, I’m actually doing the CPR with her (laughs and does the CPR motion on the desk), counting with her, trying to put myself [mentally] on scene.

[Because I couldn’t see her] I didn’t know what she was doing or if she was doing it right. Then she tells me that a man has walked up and that she was going to hand the CPR administration to him. She was freaking out…and then I said let me send you a link so we can see what’s happening.

After the link got through, all I could see at first was grass, so I instructed her to point the camera so that I could see her son. The man had her son sitting up with his head and chin leaning onto his chest as he was trying to check his pulse. I told her to lay him back down, please, and to keep doing CPR because I knew how important it was to continue until EMS arrived. They had said that he had a pulse but then they’d stopped administering CPR. I told them to restart. As the man began to lay the son down and they began CPR again, her phone died. The EMTs told us afterward that when they arrived, the man was still performing CPR.

What had happened was that the son had overdosed and he had been dead...Typically you could only imagine what’s going on but to actually see it and learn that he survived…that was special.”

Gail emphasized that without Meaghan’s instruction and encouragement to administer CPR again, the outcome might have been different. Even though Crockett County 911 is using Prepared Live frequently, it is still a relatively new software for their center that dispatchers are learning to deploy. Meaghan knew that when the second party (the man) came over to help, this was the perfect time to use the tool.

She says, “The scene was sad and it was sad that it was happening but it was very important that we got video.”

Writing the next chapter of her book (and her life)

The question at the back of my mind during this entire interview was: what’s the book about?

“It’s a comedy,” Meaghan answers, “It’s woman-strong, that’s number one. All the women in it are strong. It’s funny, not as a book but just in general, because what’s little to us [as dispatchers] is huge in the story, like kidnappings and such.”

She’s based many of the characters on people from her own life and relishes the chance to shine them in a positive light. Gail insists, through Meaghan’s humble denials, that Meaghan is a wonderful writer.

As she writes the next chapter in her book, she’ll continue to write her story as a 911 dispatcher. She also has a message for anyone struggling to write their next chapter:

“I’m 44 years old and I thought a couple of years ago that I would never start back working again. I thought I’d just continue on…and as my kids have gotten older, I thought I wouldn’t go back to work. There were days when I was training as a dispatcher when I wasn’t sure if I could do it. Gail always encouraged me and told me I could do it and every time I’d go home I’d remind myself of that. If you keep pushing and trying, you can, and you will succeed. I’m living proof of that.”

Gail concurs, “She thought she could and she did.”

Meaghan’s story is that of a person born to serve others. We at Prepared are proud to have her using our software to help save lives and aid members of her community.

Thank you for all that you do, Meaghan.