How to address 911 hangups in your center 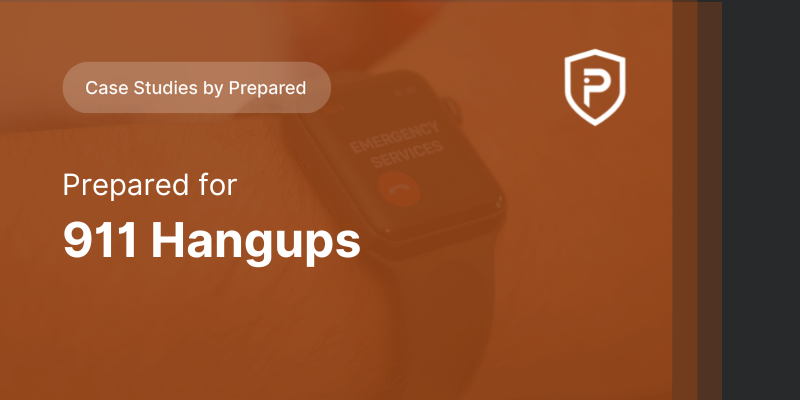 21st century technology has made calling 911 easier than ever before. Smartphones, smart watches, tablets, and many other pieces of modern hardware now offer shortcuts to calling 911 in an emergency.

Unfortunately, this has also led to a drastic increase in accidental 911 calls and 911 hangups. Across 240 million 911 calls per year in the United States, Prepared estimates that there could be roughly 33,000 accidental calls per day (5% of nationwide call volume). These calls waste valuable time for emergency personnel and raise questions like:

To try to answer these questions, we collected and analyzed data from one center that uses Prepared Live, and the numbers are incredibly revealing.

Prepared Live launched in Nye County in August of 2021. For this case study, we collected and analyzed data from a three month period in 2021 (pre-Prepared Live) and the same period of 2022 (using Prepared Live).

Across this three month time span in 2021 and 2022, the county received nearly 1,000 hangup calls per three months. In 2021, their dispatchers were forced to send first responders to investigate 75% of these calls, costing an average of 56 minutes per call.

In 2022, however, their dispatchers were able to use Prepared Live functionality to request live video proof of the scene and send outbound “text-from-911” to inform the caller that their goal was to simply confirm their safety. This lead to a staggering 35% drop in the percentage of time first responders were sent to investigate:

First responders investigated 75% of calls in 2021

First responders investigated 40% of calls in 2022

Extrapolated over a full year, Prepared Live functionality used for 911 hangups saves them:

It’s important to acknowledge that these numbers don’t only reflect time saved on accidental calls. They also represent the opportunity cost of 911 hangups and accidental 911 calls, which can be very harmful to community safety as they clog up phone lines and drain resources.

Every minute that a first responder is not spending investigating someone who hit the wrong button on their smart watch can be spent on someone who is in desperate need of assistance. Multiply these minutes and hours saved across thousands of American cities and you get a sense for the drastic impact this functionality can have.

Prepared Live is built to help emergency operators save lives - saving time can make it that much easier.